Provincial Biathlon Results Are In

Some steadfast FRASER RAIDERS competed in the Provincial Biathlon competition on the 5th of February.  All the competitors did their best and are commended for their hard work.

Placing for our shipmates' was as follows:
PO2 Louisa Tsang - First Place (Senior Female category)
LS Alex Lin - Sixth Place (Junior Male category)
PO2 Tommy Vo - Thirteenth Place (Senior Male category)
PO2 Kyle Boake also made a valiant effort but was unable to complete the race due to personal illness.
Due to her excellent finish, PO1 Louisa Tsang will also be competing at the National Biathlon competition in Laval, Quebec March 12th! I had the opportunity to chat with PO2 Tsang about her upcoming race. 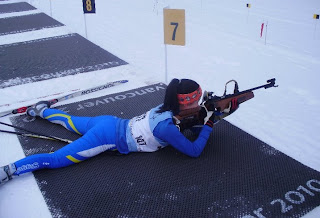 What is your routine for preparing yourself before a competition?  Before a race, I always get into the zone on the car/bus ride to the race that morning.  During the ride up, I sit, close my eyes (I'm not sleeping) and listen to Far East Movement (Like a G6), Wiz Kalifa (Black and Yellow) and Taio Cruz (Dynamite) or whatever is on my ipod that gets me going before a race.
Do you have any traditions or lucky charms that you carry during a race?

For every race that I have gone to, I have always worn my favourite Buff (headband).  Its something that I wear to races or even just regular practices.  I carry it around with me all the time, no matter what.  Maybe that's my good luck charm for now?
What is your favorite thing about Biathlon?
My favourite thing about biathlon is the adrenaline before every race.  I love the rush when the clock is counting down from a minute to 30 seconds to the last seconds before I leave the start line.  Then when I leave its gone, and I have to move on to focusing on skiing and shooting. 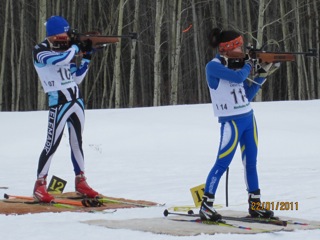 What are your goals for your biathlon career in the future?
My goals for the next couple years in biathlon is to earn gold as many times as possible.  To challenge myself to get the best time and shoot to the best of my ability.  Also, to get to Nationals (cadets and civilian) every year.  There's a possibility for Worlds in the future or maybe a future Olympic athlete in a few years?  I would just like to compete to the best of my ability and earn a good placing.

Bravo Zulu to all FRASER biathletes and the best of luck to PO2 Tsang in Quebec!

Four excellent Petty Officers began a journey towards becoming a Chief Petty Officer in July of 2010.  They were given several assignments, gave a presentation to LCdr(Ret.) Ron Theroux and FRASER Officers, and were then interviewed by the Commanding Officer and Executive Officer in December.  All candidates were well turned out and are an excellent example of what dedication and a little elbow grease in the Sea Cadet program can build.
"As Commanding Officer, I congratulate them on their successes as a Sea Cadet and thank them for their continued leadership to the junior Cadets at RCSCC FRASER.  It is not every Cadet that makes it this far, many are daunted by the work required to get as far as CPO2.  The strong example you set, and the effort you put in to our Corps make it a great place to be and learn.  I look forward to working with all of you as you build on your experience as a leader within FRASER."
Our story does not end here though...after considering many aspects of each candidate, two were selected for promotion as the newest CPO2 recipients.  On January 28, CPO2 Rhys Coulter and CPO2 Cade received their well deserved promotions.  Shortly after, promoted RCSCC FRASER lost their Coxswain as he turned 19 and aged out of the Cadet program.  One of those new CPO2's was next in line for a rewarding, but very difficult job.  They would become the next, in a long line of Coxswains for Royal Canadian Sea Cadet Corps FRASER.
Again, the two young Chiefs were interviewed and their Cadet careers were reviewed and on February 9th, CPO2 D. Cade was appointed as the new Corps Coxswain.  The following week, filling the now vacated space of Chief Cade, CPO2 Berkovets was also promoted. 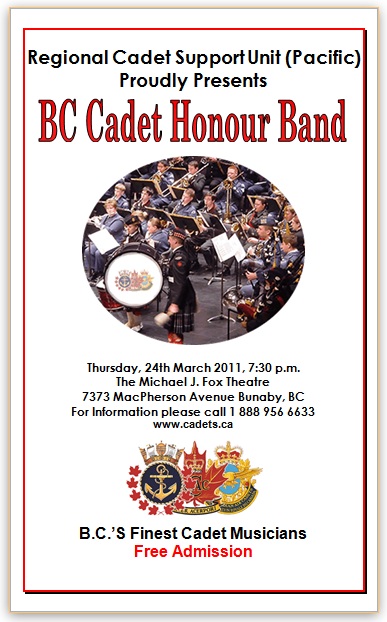 There is a significant change coming down the river for updated Sea Cadet Dress Regulations (CATO 35-01).  This means they are making changes to YOUR UNIFORM.
National Cadet HQ has released a survey, follow the link below to complete it and have YOUR say!!
http://www.cadets.ca/home-accueil.aspx?LangType=4105

On February 5th, Fraser Cadets had the opportunity to tour the Canadian Coast Guard Hovercraft Base, Sea Island.  We had the chance to ask lots questions, have a tour of their base, try on some dive gear and take a ride on the hovercraft.

MS Steede’s favorite part of the tour was of course going on the hovercraft.  He admits that it would have been longer if the bow thruster nozzles didn’t malfunction although the silver lining was that we got to watch the crew turn them manually to steer back to the ramp.

One of the many facts that the other Fraser Raiders who attended this tour learned was that the hovercraft can go places where most ground ambulances or even air ambulances simply can’t go.  Places such as beaches, swamps, estuaries and dunes.  The two hovercrafts can also conduct fire-fighting operations, rescue diving missions, law-enforcement transportation and maintenance to aids navigation.
The coast guard crew spoke about the many different types of rescue missions they have been involved in.  It soon became clear that this team of highly trained rescue technicians is very important to the safety of mariners on this coast, a fact that MS Steede found very inspiring.

Some of the Fraser cadets had the exciting opportunity to act as copilot or as the navigator during the ride on the hovercraft.  The one thing MS Steede wishes he could have done was drive the hovercraft.   Although as he says, “I got to sit in the navigator’s position and I had a really good view of what was happening all around me”.

Overall, the tour of the hover craft base was amazing!  Everyone learned so much, and given the chance would love to go again.
~ PO1 A. Gagnon